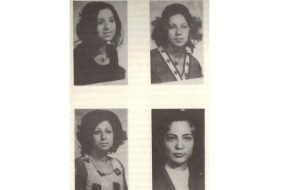 The highlands on both sides of the town of Al-Zabadani, Syria look like rolling waves, not jagged peaks. Yet they reach 2,100 meters (7,000 feet) and peer down upon this popular summer retreat 26 kilometers (16 miles) northwest of Damascus.

In the winter of 1974 – 45 years ago this week – these mountains were snow-capped. The weather had even halted service on a narrow gauge steam rail line that brings visitors from the Syrian capital.

Yet even if the train had been running, travel by rail was not possible for the four young women from Damascus’ Jewish Quarter.

The Syrian police, agents of the sadistic Mukhabarat secret intelligence service, and any Syrian, for that matter, might spot them.

The Jewish travel ban was in effect. If caught on the move, the women would be interrogated and jailed. Syrian police often deliberately locked Jews up with hardened criminals. A short stay in a Syrian prison could be a death sentence.

Thus, Lulu Zeibak, 23, and her sisters, Mazal, 22, and Fara, 24, were traveling in disguise. They were escorted by a group of smugglers. With them was the Zeibak’s cousin, Eva Saad, 18. They were in the Zabadani Mountains because of what lay only 10 kilometers away: the Lebanese border.

Prior to this journey, the Zeibak and Saad families engaged in months of painful, angry and tearful discussions. These same conversations were being held in nearly all of the remaining 100 Syrian Jewish households. Yes, by 1974, 100 families were all that remained of the ancient Syrian Jewish community. It was a community that dated back to the first century BCE. It was once over 30,000 members strong.

The treatment of the Jews in Syria was brutal but consistent with what Jews in all Arab lands endured. Every Jew today must learn and remember the Quranic concept of the “dhimmi.” In 20th-century Syria, a culture of institutionalized “dhimmitude” subservience was energized by Arabification and later Nazification. The results for Jews were horrifying.

In Syria, it started with forced military conscription (1909), then Nuremberg-type anti-Jewish laws (1930s), forced Arabization of Jewish schools (1945), laws prohibiting the ownership of real property, the shunning of Jewish businesses and boycotts (1948) and the freezing and then seizure of Jewish bank accounts (1949).

The emotional impact of some of these measures was magnified, occurring just 36 months after the crematoria had cooled at Auschwitz, Dachau, Bergen-Belsen, Buchenwald and the rest. Nor was this timing coincidental. Syria and its Vichy French puppet masters were on the side of the Nazis. They permitted the Luftwaffe to use Syria’s airbases. Nazi war criminals even sought refuge in Syria after the war. Posters in Arabic stating “In heaven, God is your ruler. On earth, Hitler” were frequently displayed in shops in the towns of Syria.

And then there were the pogroms. In 1944, the Damascus Jewish Quarter was twice sacked by mobs. Over 150 Jewish shops were looted and destroyed in Aleppo in 1947. Less than two years later, in 1949, organized attackers threw grenades into the Al-Menashe synagogue in Damascus, killing 13 and wounding 32.

In 1950, many Syrian Jews were ejected from their homes, some of which had been in their families for centuries. In 1967, anti-Jewish violence erupted again in response to the Six-Day War. “Slit the throats of the Jews!” chanted the mob. Even more chilling: “First the Saturday people [Jews], then the Sunday people [Christians].” Fifty-seven more Jews perished in the violence.

Jewish emigration from Syria came in waves. It was largely unrestricted until 1951. Then, the Syrian government cut it off. For a short period in 1954 and again in 1958, the emigration ban was lifted, at least for Jews who could pay a hefty departure ransom. Fortunately, Syria was a porous country. Illegal emigration was a thriving dark art.

Sneaking away from a repressive police state is still perilous. In 1958, Murad Guindi, 17, attempted a clandestine dash for the border. He made it only to be discovered and arrested by Lebanese police who extradited him back to Syria. Once in custody, he was interrogated, savagely beaten and tortured.

By 1974, only 500 Jews remained. In the aftermath of the Yom Kippur War, this tiny Jewish enclave alone shouldered the rage and the retaliation of humiliated Syrian President Hafez Assad and his defeated people. Men who could not beat Jews in a cowardly surprise attack on Yom Kippur turned to beating defenseless Jews in the homes and on the streets. Assaults were commonplace and Syrian assailants were immunized from prosecution.

The Syrian government cut Jewish phone lines, confiscated their radios and denied them access to the mail. Most were then removed from their jobs in the professions, at schools and even in remedial posts.

Those who stayed in Syria started to realize that the smaller the Jewish community became, the greater the chance that gratuitous or preplanned mob – even government – violence would visit upon its remaining individuals. At some point, the risk of violence is so high that it forces a decision. Is it better to ride out the Syrian storm or to put your family at risk on the open road in an attempt to escape?

Should we stay or should we go? These two questions are usually posed in unison. Our people have asked these questions in nearly every language we have ever spoken. The answers are often given in whispers, in dark rooms, in attics, or basements, and between anguished tears.

In 1974, the Mossad and various Jewish charities were working overtime to clandestinely smuggle Jews out of Syria. Relationships, networks and smuggling routes were established. Israeli and diaspora money was effectively deployed. Judy Feld Carr, a Canadian Jew, and her supporters, helped smuggle over 3,000 Jews out of the country. The Mossad was running constant operations as well, many in cooperation with the Israeli Defense Force.

Regrettably, the Syrians caught on quickly. They increased the number of men and arms at the border. The feared Mukhabarat was put on high alert. A Jewish boy was shot in the leg by a Syrian soldier while crossing the border with a Mossad handler. Two other boys, Natan Shaya and Kassem Abadi, seemingly vanished on their attempt at freedom.

Back at their homes in the Jewish Quarter, the Zeibak and Saad families’ discussions had concluded. Now the conversation shifted to strategies and plans. Slip away at night? Or try and fade away on a trip to the market? How long before the Mukhabarat or a nosy neighbor notices our absence? What can they take with them? Family photos, heirlooms, keepsakes? Or just a small bag with cash and other items that can be easily converted to cash?

It was the fear of premature discovery, as well as their daughters’ zeal to start anew in Israel as soon as possible, that led them to send the young women first. Lulu, Mazal, Fara and Eva would rendezvous with a group of smugglers. The smugglers had been recommended by two of their friends in the Jewish community. It was all arranged. Perhaps the cold and rainy weather would be a benefit, keeping border patrols to a minimum as temperatures dropped into the 20s.

We can imagine the scene as the women departed. For thousands of years, our people have often had to say goodbye in circumstances which make reunions uncertain. The family’s handoff of their daughters to Syrian smugglers was an agonizing moment for the women’s parents.

The trip into the mountains may have started well. As they left the confinement of the Jewish Quarter they would have passed valleys, brooks, waterfalls, caves and Roman ruins that dot the region. It may even have been possible for the women to begin to anticipate long-awaited freedom as they neared the Lebanese border. Lulu, Fara, Mazal and Eva doubtless imagined what life in Israel would be like for them. We will never know.

The women’s bodies were found on March 2, 1974. They were discovered in a cave outside Al-Zabadani. They had been raped before they were murdered. Their bodies were hacked to pieces and burned by acid almost beyond recognition. They had also been robbed. A finger of one of the young women had been cut off in order to remove a ring.

Syrian police returned the women’s remains to their families in burlap sacks. They cavalierly deposited the sacks in front of their parents’ homes on Purim.

The bodies of Natan Shaya and Kassem Abadi were also discovered in the cave. They were likely victims of an earlier massacre. The boys were also attempting to reach freedom in Israel. While the official statement of the Syrian government is that smugglers were responsible, some people believe the atrocity was committed by Syrian soldiers.

A member of the Zeibak family said that to this day the Syrian government has concealed all facts from them.

The last three Syrian Jewish refugee families were smuggled out of the country in 2016. Today, not a single Jew lives in Syria.

The Jews’ escape from over 1,000 years of Islamic oppression, murder, humiliation and dhimmitude is not a story only of suffering. It is a story of risk, planning, freedom, reunification, triumph and love. While tens of thousands of Jews died in the great 20th-century exodus, most survived and thrived. This is a story to tell our children. It is a story of a modern Exodus.

Yet the hard-won success of the Jews is mostly an untold story in the U.S. Most American Jews know nothing about the 850,000 Jewish refugees who lost everything except their lives. Most do not know that Jews once lived in Yemen, Egypt, Iraq, Libya, Algeria, Tunisia, Morocco, Lebanon and Jordan. They do not even have a footnote in most American Hebrew school curricula.

The fact is, most American Jews do not even know that Jewish skin comes in all shades, that some of us speak Arabic and that we have more in common genetically with our Mizrahi and Sephardi cousins than with white Americans. These are facts that should be celebrated and shared.

On the 45th anniversary of Mazal, Fara, Lulu and Eva’s murders, it is appropriate to remember their bravery, innocence and beauty. We are also reminded to nourish and protect the freedom that they yearned for but never found. They did not see Israel. But Israel sees them.

Mazal, Fara, Lulu and Eva did not reach the border. But they have reached our hearts and our history forever.